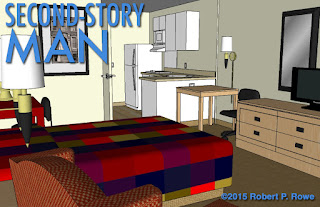 Here is the interior of Michael’s room. It’s just a small hotel room with a little kitchen. Michael had left his computer on the dresser just below the mirror. That’s where Carlos spotted it in the story.
Posted by Robert Rowe at 11:56 AM