Heading to the Hollywood Collector's Show 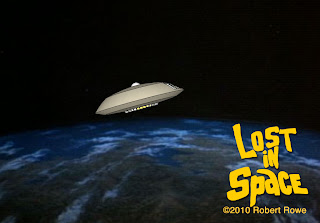 I'll be heading out to the Hollywood Collector's Show on October 8 and 9.  I'll be there selling and signing my book, "Lost in Space Design: No Place To Hide."  If you'd like to meet me this is place to be. If you'd like to meet celebrities you couldn't find a better place to be.  There will be a cast reunion from "Batman," "The Waltons" and more.  Check out the Hollywood Collector's Show website for all of the latest information.

The illustration shown here is not actually of me traveling to the show.  This is a SketchUp rendering used in my book.  The Gemini 12 was created in SketchUp, based upon the 12 inch miniature used for filming long shot flying sequences.  I've placed the model in front of a backdrop (actually a screen grab from the Lost in Space series) of Earth.  At this point the spaceship would be hitting maximum dynamic pressure.  If you want to know how I know this come see me at the show.
Posted by Robert Rowe at 5:09 PM 3 comments: 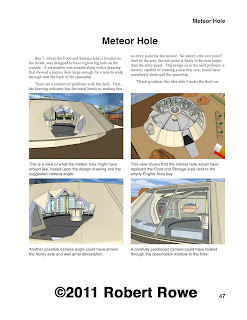 Here's a sneak peek at my new book Lost in Space Design: No Place To Hide.  The book explores the design of classic sci-fi/fantasy television show by looking at both the production and the science behind the fiction.

This page illustrates that point with a look at one of the production ideas that did not make the final cut for the unaired pilot.  In this case a meteor hole was supposed to be seen near the back of the Gemini 12 spaceship.  Not only do I illustrate some of the proposed camera angles, I also point out that destruction of this sort would have meant the end of the Space Family Robinson.

The book contains more than 100 images and illustrations.  I created most of them were created in SketchUp.  If you're interested in learning more about the design of the original Lost in Space pilot please use the link to find the book on Amazon.com.

Oh, and by the way, notice the post date of this blog entry: June 12.  That's Irwin Allen's birthday.  That's where the name of the pilot spaceship comes from too.  "Gemini" is Irwin's zodiac sign and 12 is the day of his birth.  At that time in the mid 60s there was already a NASA space program called "Gemini" and the final rocket launches were already planned (they would not continue up to 12).  It was felt that there would be some confusion with the science-fiction family's space program and the real thing, so the spaceship's name became the Jupiter 2 for the series.

But Irwin wasn't done plugging his birthday.  In Land of the Giants that is the date that the little people found themselves sidetracked on a routine trip to London.  He makes it hard for his fans to forget his birthday. 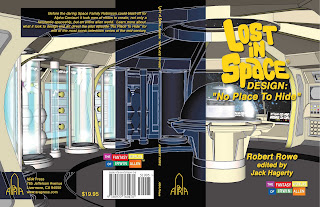 It's here.  I've written a book on Lost in Space Design, hopefully the first in a series.  The book focuses on the designs for the unaired Lost in Space pilot episode "No Place To Hide."  This is what Lost in Space was like before there was a Dr. Smith or a robot.  The book looks at the design of the pilot from a production and scientific point-of-view.
The 80-page softbound book is fully illustrated with over 100 images.  I created all of the original art for the book using SketchUp.  Thanks to this wonderful 3-D modeling tool readers will be able to look at the spaceship and other sets from angles that vintage photos have never shown.
Publisher, Jack Hagerty, has helped to add some very interesting scientific depth to the book with an analysis of the realities of space travel.  Hagerty actually is a rocket scientist with a number of interesting books on the subject.  If you enjoy space travel be sure to look into his other works too.
Lost in Space Design: No Place To Hide is currently available on Amazon.com and from the Publisher.  Click on the links to order yours today.
Posted by Robert Rowe at 8:23 PM 1 comment: 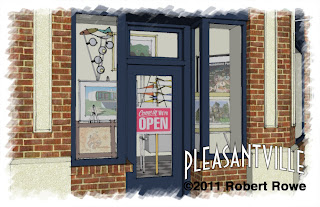 Yes, We're Open!  I'm sorry that it has been so long since I've posted anything new.  But many thanks to the thousands (yes, it has been thousands) of visitors that have come to see what I have to offer.
My blog has helped to lead me to a new theme park project.  Like all theme park projects it is top secret and I can't report on it until there are official public announcements, or the park opens to the public, whichever comes first.  The project is keeping me unusually busy so my postings will not be daily, but I will make them as often as I can.
My last posting was a SketchUp drawing of a shop from the film, "Pleasantville."  Well this is the same shop now open for business.  And what a wonderful business this is -- it's filled with my most popular work.  Leading the way by a long shot is the map from Neverland that I created for the Paris Disneyland version of the Peter Pan attraction.  "The Munsters" house is another popular favorite, along with a plastic house of a very different sort -- the Monsanto House of the Future.  And for some reason the Tomorrowland signpost seems to attract a lot of attention.
Please keep checking back, there will be more to see.
Posted by Robert Rowe at 7:14 PM 1 comment: