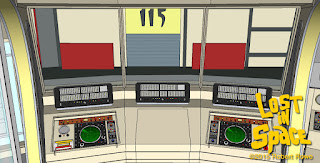 This view of the master control console shows the panel as it appeared during the first season. Instead of a central control panel the closed panel could unfold into a pilots seat. This was perfect for the concept of a single pilot, but by the second season a second seat was added and the center panel became another control panel.

Here the view out the window is of Gate 115 (or, double one-five, as it was called on the second season episode “The Ghost Planet”). The gate is not exactly as seen in the episode. Design drawings indicated that the full-sized exterior spaceship was to be used outside of the Fox Lot Mill building. The location was the same location used for the third season episode “Visit to a Hostile Planet.” Here I have dressed the mill and painted it as it was intended.
Posted by Robert Rowe at 8:37 AM