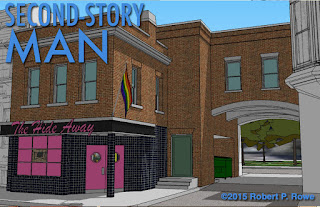 The bar’s name is significant for a couple of reasons. First, blueprint drawings from ‘Back to the Future’ showed ‘The Hide Away’ as the name for the bar—although the sign is never clearly seen on film. The second reason is for the play on words. Hideaway should be one word when indicating a place or a location. But the action—to hide away—is what my characters are doing and they are using this location to do it in.
Posted by Robert Rowe at 12:15 PM